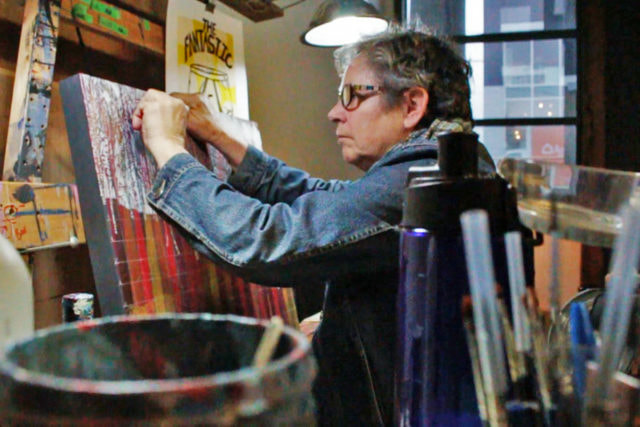 The Museum of Northern B.C. premiered a new exhibit over the weekend, with a local twist. The exhibit is by Prince Rupert artist Suzo Hickey and is comprised of her visions of the city’s streets.
Hickey grew up in Rupert, before moving south when she was 12 years old. She moved back to her hometown in 2016.
To Hickey art is making the mundane, extraordinary.
“I concentrate on the neighbourhood where people live, taking ordinary streets and doing something beautiful with them,” Hickey said.
The intricacies of small towns and their streets are something Hickey aims to capture in her art, and she hopes that people in Prince Rupert find her paintings familiar in some way.
“For a lot of people it’s about coming and looking and trying to find out where the road is, or find the street corner. For me it’s about trying to capture Prince Rupert,” Hickey said.
Hickey has been painting Rupert for many years, and she feels like more small towns need to be appreciated for their hidden treasures.
“Let’s just celebrate the small towns we live in, a lot of focus is on large areas, but we need to shine the spotlight on these areas where we live,” she said.
Hickey is a part of a group of British Columbian artists who call themselves the Fantastic Five, the group travelled to Wales to paint the stunning vistas and rolling hills. While she was there, she came to the realization that northern B.C. has a beautiful visual of its own.
“So many stunning vistas here, especially in Rupert we are so close to nature,” she said.
Her art show will be on display at the Ruth Harvey Gallery in the Museum of Northern B.C. starting Nov. 26 until Jan. 15, 2019.