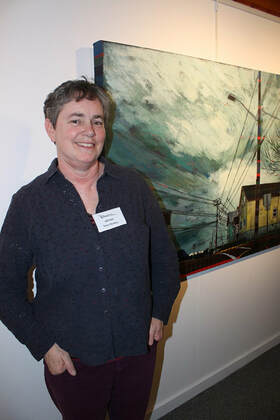 Artist Suzo Hickey in front of one of her paintings.

Northwest artists light up Terrace gallery
Bob Mansfield and Suzo Hickey both work with layers to achieve striking artistic feats
June 15, 2014 / community
​
The dual exhibits at the Terrace Art Gallery are linked not so much by style but through the process by which the two artists on display arrived at their very different finished paintings.
At first blush it would appear that Suzo Hickey, whose work is in the upper gallery and which is called “Rain in the Forecast,” and Bob Mansfield’s lower gallery collection, “Abstraction by Nature,” are from opposite ends of the artistic spectrum.
Mansfield’s large to medium-sized canvases are done in a contemporary abstract or expressionist style with large watery colour streaks and splatters all over the shiny surface. Then there’s Hickey’s, of similar physical dimension but much more placeable settings of houses in coastal towns with dynamic and emotive cloud patterns overtop.
Both artists have connections to the north with Hickey having grown up in Prince Rupert and Mansfield now living in New Hazelton.
And both use layering techniques to add depth to their creations.
With Hickey’s work one notices intriguing lines of colour peaking through here and there from the street scenes, adding an abstract flourish to her realist/impressionist offerings.
As it turns out these are not streaks added after the fact but part of a grid of colours which form the substrate or first layer of her paintings. Only after she has painted a grid of variously coloured lines does Hickey then begin making shapes which comprise the actual scene over top, letting the colours shine through where needed to fill in objects.
Mansfield, while offering up a very different type of composition also uses a layering technique. Except in his case he uses large transparent boards of acetate. Applying paint to one, he then presses it into the canvas, after which he will paint another and apply that, gluing them together with a spray glue that is also transparent. The result, after several applications of painted acetate is an expressionist pieces with a glossy  pop art finish.
The exhibit is a great balance of artists from the north who are tackling very different projects but united by shared practices.
It’s worth popping in to see for yourself the fascinating dichotomy.
Show runs from May 30 – June 21.