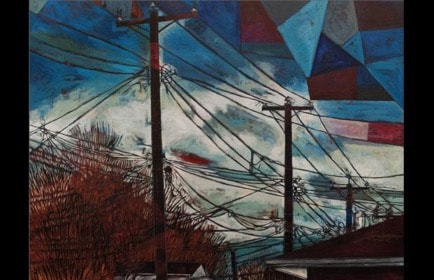 Suzo Hickey's Everything that is in front of me: East Van landscapes is at Rhizome Cafe

​IN CONCERT: Lauryn Hill
Where: Commodore Ballroom, 868 Granville St.
Why: We don’t typically recommend sold-out shows (for obvious reasons), but if you didn’t know this concert was happening I’d be remiss if I didn’t inform you. It’s the first of two dates here for this former Fugees frontwoman and, guaranteed, it’s an event that whoever attends will be talking about the next day. Why? Because if Hill is on, then the chance to hear her catalogue of Fugees hits and classics off her solo album The Miseducation of Lauryn Hill in a venue like the Commodore could be once in a lifetime. If she’s unfocused and rambling, well, then attendees will have seen for themselves why she didn’t go on to even loftier heights.
When:8 p.m.
Tickets: SOLD OUT

SPECIAL EVENT: The Jessie Nominations Party
Where:Improv Centre, 1502 Duranleau St., Granville Island
Why: The Jessie Awards turn 29 this year. That’s a long time to be honouring the terrific local theatre community we have here and is a testament to the fact that the art form is alive and kicking. If you can’t make this do announcing the nominees, maybe you want to save the date of June 20, when the Jessies will be handed out. Tickets for that gala are at Ticketmaster.
When:4:30 p.m.

EXHIBITS: Suzo Hickey’s Everything that is in front of me: East Van landscapes
Where:Rhizome Cafe, 317 E. Broadway
Why: I felt a kinship with this show immediately, probably because the main piece of art in my own living room is a painting inspired by a house in East Van. It’s not a “Hickey,” but it could easily have been, as this show features the mid-century box houses of the neighbourhood framed against restless skyscapes and leafless treescapes. Finding inspiration where you live — can’t beat that.
When: Starts Tuesday. Runs till July 17. Reception and artist’s talk on June 2.

SPECIAL EVENT: Bob Dylan’s birthday
Where/Why/Where:There are more than a few Dylan fans in the city and what better way to toast his talent than to have a drink in honour of his birthday. We’ve heard of two gigs commemorating the occasion: one is at the Waldorf, which comes complete with a Dylan impersonator, trivia and, of course, his music spun all night. Another is a night at the Railway, with bands such as the Modelos and Debra Jean & the Means paying tribute.
hongsansoy@theprovince.com
twitter.com/hans_ongsansoy
​